Make the most of the fresh produce you buy and ensure not just the maximum shelf life but the highest quality of food safety too.

We ship this product as a concentrate with the essential oil components bound onto Acacia gum. The pouch of what are simply natural flavours comes ready to be made up to a full litre (33 fl oz) with warm (tepid) water to make a dipping solution for fruits, vegetables, salad greens, fresh herbs, sprouts and any meats and seafood. It is even effective at slowing the ripening of soft cheeses and will extend the life of cut flowers.

To use Herbal-Active Natural Food Rinse®, all that’s needed is to wet the surface of these foods with the solution and its powerful antimicrobial action will kill yeasts, bacteria, moulds and fungi in seconds. Amazingly, it is harmless to human cells and we consume the ingredients every time we use herbs and spices to flavour our food.

The reason this works is the way in which we combine the extracts and the exact proportion of each component. 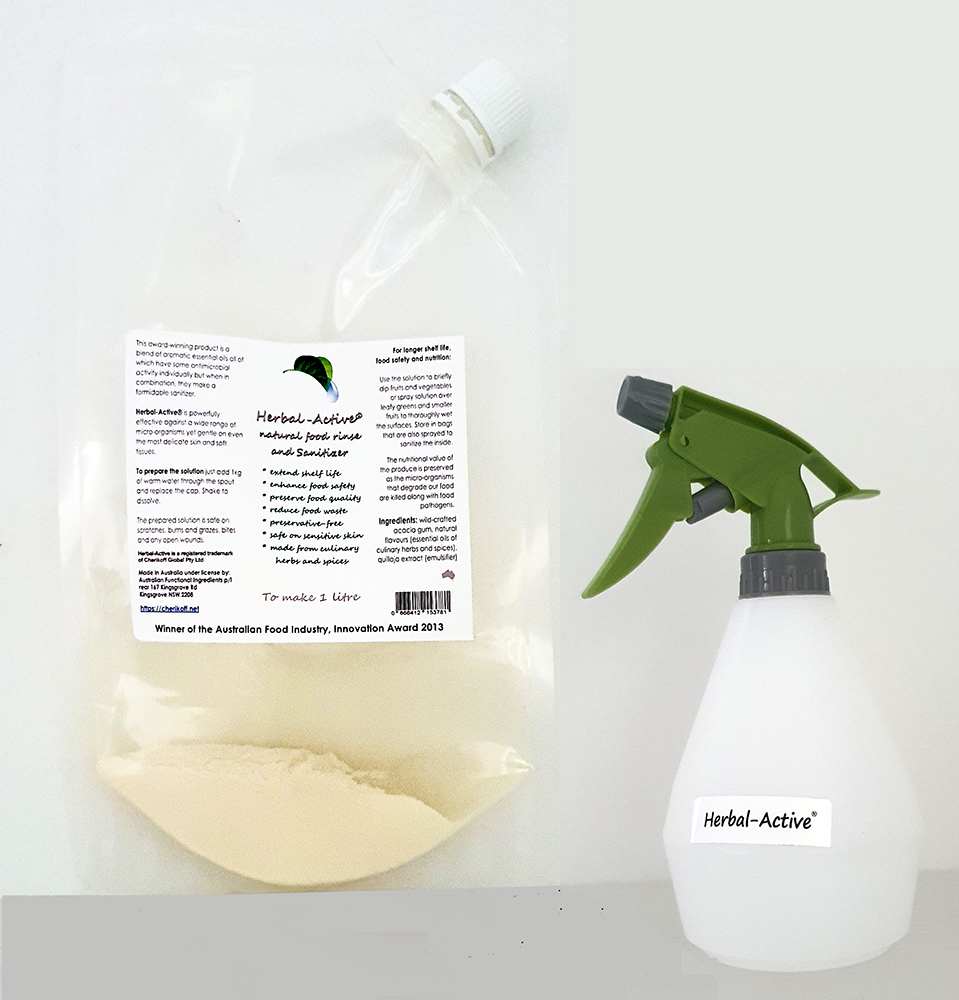 Simple to use and very cost-effective, Herbal-Active Natural Food Rinse® will safeguard you and your family against food poisoning and will also extend the life of fresh produce washed in it. This will save way more than the cost of the Rinse in that you will reduce the amount of food you throw away because of rotting.

Herbal-Active Natural Food Rinse® can also be used on the skin for a quick and effective antiseptic wash. Good on scrapes, minor burns, cuts and abrasions and even to treat microbial infections such as tinea and acne.

When dipping cut flowers, the whole flower head can be dipped and ensure that the base of the stems are well wetted as bacteria growing on the cut surface can block the uptake of water and dehydrate the flowers.

The solution that our pack will make should last an average family around 4 to 6 weeks.

Keep yourself and your family safe from food borne illnesses and from harmful chemical food washes and topical antiseptics. At the same time save money too, as Herbal-Active Natural Food Rinse® makes fresh food last longer while it secures the nutritional quality of the produce we eat.

Herbal-Active® won a highly competitive, Australian Food Industry, Innovation Award in 2013, This helped grow its use as a natural antimicrobial in a wide range of applications in the food, beverage, packaging, cosmetic, health care and allied industries.

So what are the options? What is the food industry doing now? (even though it doesn’t seem to work)

Around the world, many people get ill and recently 22 people in Germany have died from microbial contamination on fresh produce and hundreds more have been hospitalized. Have a look at the FDA Twitter feed for product recalls (FDA food recalls).

Microbial contamination of our food is a very real problem. Seafood tops the list but so-called ‘fresh’ produce is often anything but fresh.

There are product recalls and health alerts on salads, sprouts, tomatoes, poultry, ground beef … the list goes on.

A report that reviews previous data has found that five common food borne pathogens may increase the risk of serious complications, according to lead author Tanya Roberts, of the Center for Food Borne Illness in Grove City, Pa. in the USA.

“Our report addresses the fact that most food borne pathogens can cause severe disease,” Roberts said during a press briefing. “These serious or long-term complications include kidney failure, paralysis, seizures, hearing and visual impairment, and mental retardation.”

The five major pathogens are Campylobacter, E. coli, Listeria monocytogenes, Salmonella and Toxoplasma gondii. But more than 200 pathogens can contaminate food and cause disease, Roberts said.

While the severity of the acute infection varies greatly, depending on the pathogen and the patient’s own vulnerability, the most common symptoms are diarrhea and vomiting. But even after a patient recovers from these symptoms, they may have to deal with longer-term effects.

Roberts said foodborne illness “must be recognized as a serious public health issue if we want to make meaningful progress in reducing sickness, injury, death and long-term complications associated with foodborne disease.”

The World Health Organization has even addressed this matter as important to our future as multi-drug resistant bacteria can kill us. What is the mildest infection today might be lethal tomorrow.

The challenge is that repeated food poisoning can make us very ill long term. Systemic infections of antibiotic resistant bacteria can be extremely debilitating and even lethal. Our guts can get leaky and we begin to suffer from food sensitivities and allergies, some with life-threatening symptoms (eg anaphylactic shock). Our kidneys can fail and our livers too. Google the health consequences of repeated food poisoning and be prepared for some horror stories.

Birds, animals and soil residues, polluted water (and sewage-loaded sea water) can add a whole community of micro-organisms to the outside of your food.

It is estimated that up to 25 pairs of hands might handle your fruit or vegetables from the farm up to the time it gets onto your plate. This can add the even more harmful human contamination. We have all heard about E. coli which is a faecal coliform or an indicator of human waste contamination and generally comes from unwashed hands but sneezing or even talking or coughing over food can add human bacteria that can make others sick.

The very old and very young are particularly susceptible.

This is a snapshot of the recent blog headlines from Food Safety News, an industry journal in the USA:

German based E. coli O104:H4 Outbreak is now second largest and most deadly in history

And it doesn’t need to be human food that can make you sick. Recently, a pet product (pigs’ ears for dogs) contaminated with Salmonella could easily have cross-contaminated anyone handling the product while rewarding their dog with a chew.